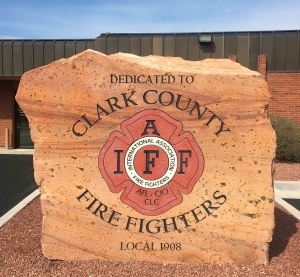 The Clark County Fire Department was formed in 1953.

Unfortunately, at the time, there were no regulations for safety, adequate equipment or fair wages. In fact, most firefighters had to purchase their own masks and equipment, which tragically led to many unnecessary deaths.

Firefighters were also forced to work two or three jobs just to make ends meet while purchasing their own equipment and fighting low wages.

Additionally, serving as a firefighter was also considered an “early death occupation” because the average lifespan was only in the 40s, long before any health benefits were received.

To address these concerns and bring safety back to those who were on the front lines for our community as much as possible, IAFF Local 1908 was formed in 1969.

During the early years of IAFF Local 1908, the focus of the union was to improve upon the needs and safety of workers. After 16 years of seeing problems and accidents with firefighters, we were able to implement the first set of rules and regulations to help firefighters in the CCFD.

Over the years, training and safety regulations have consistently increased in order to best serve the residents of Clark County.

For nearly 50 years, IAFF Local 1908 has worked to protect the health, safety, security, and benefits of those who step up to serve our community as members of the Clark County Fire Department. If you have any further questions, please contact us at: [email protected].